We are proud of our highly motivated team. Our hotel has longtime employees with a lot of experience. 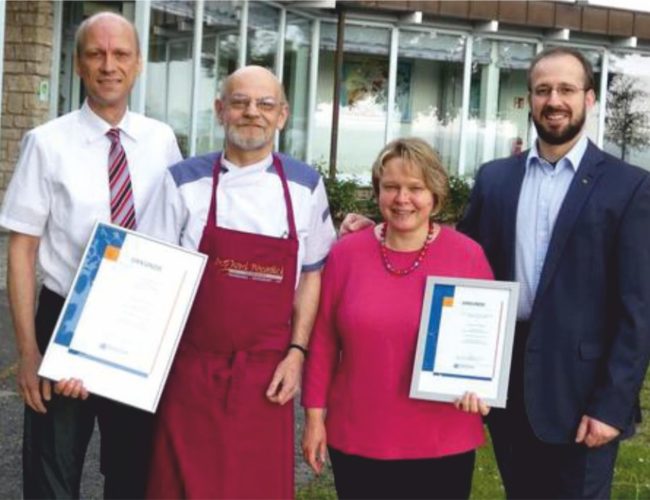 In order to be praised by both bosses as a “good spirit of the house”, as a “supporting pillar of the company” or as a “reliable, loyal employee”, you have to put your heart and soul into a company. And this is exactly what the two employees of the 3-star superior hotel and restaurant “Rheinblick” on the Bendorfer Vierwindenhöhe do: Chef Markus Haßlocher and hotel manager Martina Emsermann, who is also affectionately called “Mutti” by her colleagues.

Martina Emsermann is responsible for the organization of festivities, arranges the flower decorations in the house with her green thumb and can also arrange the “classic presentation” or the wine service for the trainees. “Even though this is unfortunately not always used today, it is still important to pass on the knowledge,” she rightly says. In 1982 she began her training as a hotel manager in the Schlosshotel in Herborn and remained there until 1986. Then she accompanied a position as a parsonage keeper in a Catholic parsonage in Höhr-Grenzhausen until 1993. But on 16 October 1993 she gladly returned to the hotel business. With a smile she reports: Michael Helling was at that time still in the school education and Markus Helling had as Zivildienstleistender still long hair.

At that time there was still an old woodshed outside, where cars were parked, where the new hotel building stands today. The number of rooms has risen from fifteen to thirty-two today. There has always been a lot of positive change here. And that’s what our guests expect, too.” Markus and Michael Helling report on the time when they were integrated into the management in 2003 to finally take over the “Rheinblick” completely. “At that time the planning of the rebuilding began and it followed a time of six months of ?alive building site? The kitchen was completely rebuilt during operation, the terrace was changed, the work was done here and modernised there. The official requirements had to be fulfilled due to the change of generation and owner. Markus Haßlocher also loves his profession of cooking perceptibly. He gets enthusiastic when he talks about the fresh preparation of food in the Berghotel Rheinblick. Here, the emphasis is on homemade croquettes, duchess potatoes and homemade roulades. Even the sauces and broths are still prepared. From 1980-1983 he was in training at the Palatinate Court in Edenkoben, followed by employment at Maritim Braunlage in the Harz Mountains and Würzburg, Dorint in Trier and Cologne. He also cooked in the “Flora” at Cologne Zoo, was assistant to the works manager at Hambach Castle and, among other positions, at Engers Castle. From there he moved to the Berghotel Rheinblick on 1 March 1999.

Today, the bosses proudly add: “Both ensure us quality and service standards and are simply part of the company”. Martina Emsermann and Markus Haßlocher, together with Markus and Michael Helling, are also delighted that many former trainees like to find their way back to the Rhine view again and again and like to drop by for a chat. This emphasizes and strengthens the family spirit that characterizes the Bendorfer gastronomy and hotel business on the Rheinblick. Such employees are a blessing for the company and a figurehead and a great contact point for the guests.